https://nationalcomfortinstitute.com
Nick joined NCI in July 2011 and is currently the Director of Sales and Operations. In that role he manages both the sales and operations teams. In addition, Nick sells private training classes, creates the monthly PowerPack, on-boards new members and has many other responsibilities. Prior to coming to NCI, Nick worked at Best Buy and FedEx, and also worked at a number of odd jobs including remodeling, demolition, and landscaping. Fun Fact: Nick is married, has 2-kids and enjoys basking in the warmth of family. He also has a small petting zoo consisting of 1 dog, 2 cats and 2 ferrets 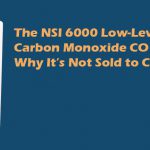 National Comfort Institute (NCI) staff are often asked why we don’t sell the National Safety Instruments (NSI) 6000 Carbon Monoxide (CO) monitor directly to the public? The truth is that we could sell more monitors if we marketed and sold them directly to consumers. There are, however, some significant reasons why for nearly 20 years, …
Read more →