Carbon Monoxide: What Do You Know? Three Reasons for Zero Draft

David Richardson is an NCI Curriculum Developer and Instructor

Many technicians get distressed when they measure draft pressure in the flue and discover the reading is zero. Let’s look at three common reasons for zero draft pressure in a flue. We’ll also determine what defect you’re dealing with.

Building depressurization is probably the most common reason for zero draft pressure. Depending on the source, depressurization can occur randomly or continuously. The pressure needed to allow flue gases to exhaust equipment as designed are fragile and easily influenced.

Common sources of depressurization include: 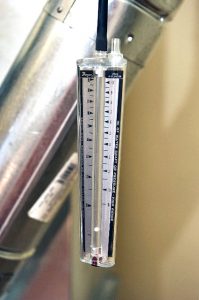 A draft gauge, also known as an air meter is indispensable for measuring draft in appliance flues. By using NCI’s protocol you can accurately measure and diagnose flue problems with this tool. Use on standard, mid, and high-efficiency furnaces, boilers, and water heaters.

As you measure draft pressure, start sequentially turning on different fans, starting with the largest. Watch the draft pressure. When it drops, you found the guilty fan. If you turn on the appliance and measure zero draft from the start, you might be dealing with a restricted flue instead of depressurization.

Equipment with no draft from the beginning could be tied to a flue that is restricted or completely blocked. Conditions like this are why it’s so important to measure ambient carbon monoxide (CO) for your personal safety. If the equipment is producing high levels of CO, and the flue is restricted, you might not walk out of the mechanical room.

In this situation, there could be debris blocking the flue due to deterioration or an animal nest. These are clues that much bigger issues exist. They are typically symptoms, not causes. Digging a little deeper with a visual inspection will uncover this problem quickly.

Another restriction rarely considered is a flue liner. These are required by code in many parts of the country and can cause more issues than they solve when sized or installed incorrectly. If the liner is kinked or undersized, you can expect to encounter flue gas spillage as you would with a blocked flue, except everything looks great with a visual inspection.

To determine if you’re dealing with a restricted flue, shut off gas to the equipment and watch for an increase in draft pressure. If it moves upward within a minute of turning the fuel off, you have a flue restriction that to investigate. 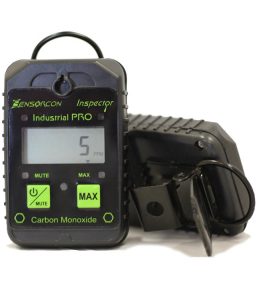 The handheld carbon monoxide meter will keep you safe when working in a potential CO leakage area.

One of the most deceptive situations you can encounter with no draft is water heater operation in the summer time. You’ll often find no signs of spillage when this condition exists, even though the ball of the draft gauge is sitting at the bottom, not moving.

It may be hard to believe, but this condition could be acceptable even though it looks quite the opposite. When the heat of the summer turns up, there is less temperature difference between the flue gases and outside than there is in the winter time. Due to this, draft pressure can drop so low that it is virtually undetectable.

While this isn’t an all-inclusive list of reasons for no draft, it’s a starting point for the most common ones. It’s important to remember draft pressure is not the determining factor in whether flue gases properly leave the equipment or not.

You can use some subtle differences between all three reasons to help you uncover the source. Reasons 1 and 2 often show signs of spillage around the draft hood. This requires a draft interference test and/or restricted flue test to distinguish between them. Stable CO readings are the only indicator that number 3 is a reason. Without them, you’ll probably misdiagnose the problem.

The answers are out there, together we will find them. If you need any additional information on this material or have any questions, feel free to e-mail me at doccombustion@gmail.com.