One of my favorite fictional characters growing up was Sherlock Holmes. Holmes was an extraordinary detective with a gift for finding clues of a mystery others completely missed. His confidence, observational skills, and attention to detail added an extra appeal to the stories.

Little did I know the qualities of Sherlock Holmes would apply to my skills when conducting CO testing years later. Holmes solved his cases based on bite-sized clues and the logical order in which events must have occurred. When you test for CO, you put together your diagnosis in a similar manner.

In the Sherlock Holmes stories, you’ll find some great quotes based around his style of detective work. Let’s look at three such quotes that not only give us a glimpse into the mind of this great character, but also some
insight as to how he might have conducted CO testing.

“It is a capital mistake to theorize before one has data.”

Holmes didn’t put together the conclusion of a case before he had enough evidence to connect all the dots. He gathered clues from the scene of a murder and observed how they related to each other through his keen sense of observation.

If Holmes handled his investigations like so many in our industry handle CO investigations, the Butler would
always be the one “whodunit.” There would be no additional data gathered and the case would be closed before arriving on the crime scene.

The “Butler” in the HVAC industry is often the heat exchanger of a furnace. Many technicians who receive residential CO alarm calls head straight to the heat exchanger. This component is condemned and found guilty with no additional data to back up the conclusion.

What if a CO call was handled like Sherlock Holmes conducted an investigation? First, adequate data would be gathered from the scene. An HVAC technician would use a combustion analyzer and draft gauge combined with their troubleshooting skills to track down the true cause of the CO alarm, instead of theorizing before having all the data.

Once necessary information is gathered, logical conclusions can be made based on clues discovered by measurements. Sometimes the measurements will point to a suspect that doesn’t make sense. This leads us to our next quote.

“There is nothing more deceptive than an obvious fact.”

When you test for CO, your measurements and data may point to a suspect you originally didn’t consider. Or it may point you to a suspect that is contrary to what you’ve learned in trade school or read in books. Holmes urges us to not be deceived by obvious facts, but to let the data lead us to our conclusions. 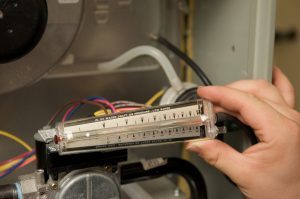 Several years ago while teaching a class in Dallas, Texas, we were testing in a vocational school lab. The HVAC lab was a large room at one end of the building. On the opposite side of the building was a carpentry lab. Both labs were directly connected.

The carpentry students were working on projects the day we were testing equipment in the HVAC lab. They had a large 20 X 20 door opened up to let some sunshine in while sanding and cutting wood.

In the HVAC lab, there were five pieces of natural draft equipment on the back wall, opposite the 20 X 20 door. When we started up the equipment, they all began to backdraft, spilling flue gases. The CO readings were
rising quickly and we had no draft pressure in the flue.

The HVAC students immediately looked for a blocked flue or an exhaust fan running in the lab. Neither suspect was found to be a contributing factor. So why was the equipment spilling? Remembering the wide-open 20 X 20 door, I asked the students if this could be the cause. Their immediate response was the door would allow all kinds of air into the room and shouldn’t be an issue. I grinned and asked the students to watch the readings while I walked over and closed that door.

As soon as it was closed, I heard “No way!” across the building. Pre-conceived notions proved to be deceptive and caused an obvious fact to be ignored. This leads me to the last quote from Sherlock Holmes.

“When you have eliminated the impossible, whatever remains, however improbable, must be the truth.”

When I shut the door, I eliminated the impossible. In the mind of the students, there was no way an open door could cause the equipment to spill as it did. The assumption was made that air in the building and flue gases “knew” which way to travel.

It seemed impossible, but the measurements and data pointed to the only remaining influence on our CO readings being the door opened. Once eliminated as a possibility, it allowed us to continue with our diagnostics.
When testing for CO, you have to keep an open mind and consider possibilities previously ignored. Don’t limit your troubleshooting skills by jumping to conclusions. Follow the example of Sherlock Holmes and create your own stories.