And Suddenly, He’s Gone . . . A Farewell to Joseph Fristik

This is one of life’s toughest assignments: saying farewell to someone who had a major impact on your life and career. It is with a very sad heart that I bid adieu to Joe Fristik, corporate VP of marketing and national accounts for Rheem. Joe passed away early on March 25, 2015. He was only 57 years old. He is survived by his wife of 32 years, Debra, and their three children, Joseph, Kelsey, and Jared.

For me, it’s always difficult trying to find the right words to mark the passing of remarkable people who not only positively impacted an entire industry I love, but also my place in that industry. Joe Fristik was one such person.

I came to know Joe more than 14 years ago when he took over the reigns as group publisher of Contracting Business.com magazine. At that time I was the executive editor of the magazine and Joe was very eager to learn everything about the HVAC industry – its people, technology, and issues. He was a quick study. Fristik was already a publishing industry veteran of the magazine’s parent company, Penton Media and was no stranger to the world of magazine management, sales, and marketing. He wasn’t shy about asking hard questions, sharing new ideas, or expressing his opinions. He was superb at selling ideas by making people believe them to be their own. But he was a great listener as well. He was very fair-minded and would listen to all the facts in any scenario and come to the right decision in solving problems. 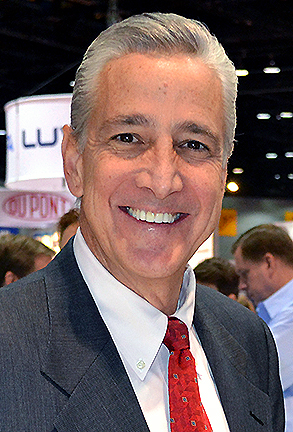 Joe Fristik was the Corporate Vice-President of Marketing and National Accounts for Rheem. He joined the company in 2011 after a stellar career as a group publisher for Penton Media, Inc., Cleveland, OH. Photo by Terry McIver, Contracting Business.com

In other words, Joe Fristik always knew the right thing to say and was brilliant when it came to entertaining clients and solving problems. From a staff perspective, we all knew that he always had our backs.

He went from being my boss to being a colleague when he promoted me to Chief Editor of Contracting Business. Our partnership was strong as we worked together on the strategy and planning necessary for the continued success of our magazine and brand. We traveled the country together to distributor meetings, association events, and sales calls. I learned a lot about wine and cigars and I tried to teach him about beer.

You really get to know someone when you spend that much time together. To be honest, at first, he was a little intimidating. He remembered everything and often quizzed me on conversations we had, commitments I made, and assignments I hadn’t completed. He could be quick to point out a faux pas I made during a dinner (usually when it came to wine tasting) or to sing my praises when I did well in an editorial or on a sales call.

He took the time to help build my confidence in my new role and taught me how to manage my time, our staff, and our budgets. And in return I tried to always have his back, to never allow things to blindside him (though I wasn’t always successful at that), and to be frank when I disagreed with him. He seemed to truly appreciate that.

Under his guidance the magazine’s brand and reputation soared to new heights and the relationships we enjoyed with our vendor partners – Rheem, Carrier, York, Lennox, Waterfurnace, Emerson, and MANY others – were better than they’d been for years. He even earned the respect of our competitors. I daresay that Joe Fristik was one of the best known names in most circles of the HVAC Industry.

Such relationship building worked so well that in 2011; Joe Fristik left our Penton family and became a member of the Rheem team, based in Atlanta, GA. There he joined forces with his good friends J.R. Jones, Chris Peel, and their team to help Rheem increase its reach into the American HVAC universe. Says Jones in a press release issued shortly after Fristik’s death, “During his rich career, Joe provided many lasting contributions to our industry and made many meaningful friendships along the way. He also made significant contributions benefitting Rheem’s growth.”

And then, suddenly, he was gone – too young and too soon. Now there is a great hole in the HVAC Industry.

Joe Fristik, you will be missed.