Is Personal Technology a Boon or Bane to the HVAC Industry?

OK, so for those who know me, they know that since before college I fell in love with all things “techie” – and that was so long ago that the word “techie” didn’t even exist. Back in the late 1960s and 1970s, the tech was all things stereophonic – receivers, amplifiers, turntables, eight track and cassette decks, tuners, speakers, graphic equalizers, and wiring (yup, even wiring) – that made my eyes glaze over, drool dribble down my chin, and me work harder to earn money to buy the latest and the greatest equipment I could afford. Names like Harman Kardon, Marantz, Alpine, Panasonic, Pioneer, and Bose were the brands that we talked and read about, and craved. 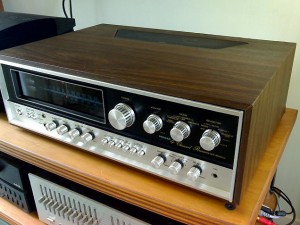 Once upon a time, the tech behind home stereo was the rage. That is, until it was completely supplanted by the Computer-Internet-Smartphone tech of today.

This equipment and technology helped blast the already burgeoning music industry into the stratosphere, exploding record sales, and creating an entirely new world when it came to the access and collection of music.

In the early 1980s, the new craze was the personal computer and the talk slowly turned to hard drives, monitors, mouses, floppy disk drives, 300 baud modems, operating systems, RAM, ROM, and so on. Names like Apple, IBM, Radio Shack, Amiga, Kaypro and others were the rage and the topics we talked about, researched, and spent our hard-earned cash to buy.

This “personal tech” revolutionized the way we work, communicate, and play and created an entirely new industry that eventually led to offshoots like gaming consoles, hand-held PDAs, laptop computers, The Internet, Websites, smart phones, tablets, and now, even smart watches. It even revolutionized and took over the music industry and all that cool stereo equipment from yesteryear.

Yup, it changed everything.

People today are more enamored with their personal tech than ever before and it’s changed our society and the world. The question is – is this a good thing or a bad thing?

Recently, my favorite newspaper, The Wall Street Journal, published a report entitled, “Is Technology Making People Less Sociable? (WSJ, May 11, 2015, p. R4),” in which they provided point-counter-point arguments on both sides of the question. According to author Larry Rosen, who sees technology as making people less sociable, “people connect MORE with the people in their virtual world than they do with people in their real world,” Rosen writes. 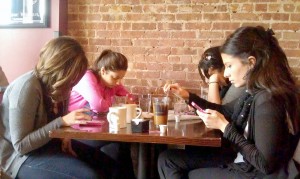 A social dilemma? Does tech trump human interaction, even at the dinner table?

I liken this to my personal experiences when going out to dinner with family and friends. More often than not, people at dinner spend a lot of time not looking at each other or talking – they’re all on their phones. Have you noticed this too? It seems sad and rude at the same time and makes me wonder what they do around the dinner table in their homes.

A recent PEW Research study of adults sourced in the WSJ story found that in the U.S., 71% use Facebook at least occasionally, and 45% of Facebook users check the site several times a day. The report concluded that “we spend so much time maintaining superficial connections online that we aren’t dedicating enough time or effort to cultivating deeper real-life relationships. Too much chatter, too little real conversation.”

American Sociologist Charles Cooley, a turn-of-the-20th-Century American sociologist, found the onslaught of home delivery newspapers to be undermining of the American Family.

On the more positive side, author Keith Hampton quoted a newspaper article, written in 1909, that said, “what a strange practice it is…that a man should sit down to his breakfast table and, instead of conversing with his wife, and children, hold before his face a sort of screen on which is inscribed a world-wide gossip.” Hampton says this was a quote by American sociologist Charles Cooley, about “how morning delivery of the newspaper was undermining the American family.”

Wow! “They” said the same thing about Rock-and-Roll music. Do you see a trend here?

Hampton counters Cooley’s point to say that communications, no matter the form, always enhances socialization. He says that technology allows people to broaden their social circles in ways they haven’t been able to before. “We are now no more addicted to communication and ignore our relationships as a result, than we did 100 years ago. In studies with my students and collaborators, we have found that Internet and cell-phone users, and especially those who use social media, tend to have more diverse and a larger number of close relationships,” he writes.

In the HVAC world, this tech impacts not just the social aspects of interpersonal communication, but our HVAC tech too. Thermostats talk to mechanical equipment and the mechanical equipment talks back. Utilities can communicate with your systems and can interact with them. Even charging an air conditioning system can be done with little human interaction. As this tech swept the nation the first time in the 1980s (it is re-sweeping the nation even as we speak, thanks to further advances in “smart” technology), there were outcries from sheet metal workers, HVAC service technicians, and even company owners on how technology was going to contribute to the loss of industry trade-craft and skills. Some said it would “dummy down” our industry.

Combine this with the sociable aspects where people today seem to always have their noses in their devises and it could be said the HVAC universe is becoming a cold, impersonal place, right? 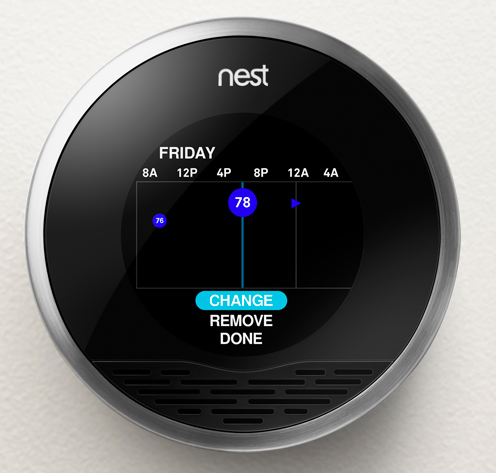 The NEST LEARNING THERMOSTAT uses technology that has changed the way consumers interact with their comfort systems.

New technology creates new skill sets and people can retrain to understand and use that technology. Trade-craft will change, but there will still be trade-craft. That’s my opinion. Plus OUR tech is cool – it attracts young people. We have amazing training programs to help people develop that tech trade-craft and skill set. Consider this a shameless plug for NCI membership!!!

From a communications standpoint, I suppose it COULD become cold and impersonal, but then how successful would contractors be? No matter the tech, the HVAC industry remains a people business. A contractor’s relationship with customers and suppliers really is the key to their continuing success. But it does behoove owners to pay attention to how their personnel use their smart devices and make sure that all customer touch points are positive and personal.

Is technology a boon or bane to the HVAC Industry? It’s both. It all depends on how it’s used. I believe the positives far outweigh the negatives on so many levels.

So how do you see this tech? What are your experiences with it. I’d love it if you shared your stories with me either here, or on Facebook, Twitter, or (if you are an NCI member) on PerformanceTalk.

And, when you go out to dinner with your family and friends, do me a favor — put your phones away, OK?