Science Fiction or Not: New Technologies in the HVAC Industry

Anyone who knows me knows my love for science fiction stories. I’ve been reading them most of my life. One of my favorite sub-genres focus on future societies and how technology impacts the lives of people living in them. Some of the most creative authors favor this genre and some of their ideas are taking root in reality today.

The most obvious of these are the concepts behind today’s smart home and Internet-of-Things technologies. But there is something else coming along just as strongly, though with somewhat less fanfare. It is changing how we design and build buildings and is definitely impacting the HVAC Industry. 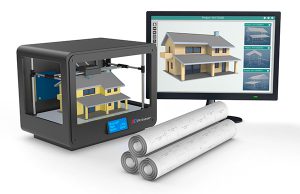 In the June 23rd edition of U.S. News and World Report, I read an article entitled, Are 3-D Printing and Virtual Reality the Future of Housing Construction? Author Devon Thorsby writes, “Newly developing technology, 3D printing included, may be incorporated into the construction process in any number of ways in the future. Portions of homes or furnishings and appliances could be constructed with 3-D printing, reducing the number of hands and, ultimately, the cost to complete a home.”

Apparently, 3D printing was used to build a “tiny house” in Russia in just a day. By tiny, I’m talking about a mere 125 square feet at a cost of just over $10,000. Obviously, that won’t really work in U.S. markets where tiny houses are rare and not in great demand. However, this technology is useful for building components – walls, floors, or furniture. It’s for use not only new construction projects, but remodels and renovations as well.

Not too long ago I was talking with one of my neighbor’s teenage sons who is preparing for college with a focus on civil engineering. He is doing a summer co-op at Case Western University building a giant 3D printer from scratch that will “print” using concrete. The idea is to perfect the technology so that companies can create their own components to add to the modular building industry.

Of course, modular construction is nothing new – it’s been happening since 1900. But combined with modern technology, it is becoming more cost efficient for builders and more affordable for home buyers. It even addresses the shortage of skilled construction workers and rising building costs.

So, we are already on a path to training the young in future technology today. My neighbor’s millennial son absolutely loves this and has plans to be in the construction industry. This tech seems to be just the thing to attract young people into the trades.

Furthermore, Behrokh Khoshnevi, Director of the Center for Rapid Automated Fabrication Technologies (CRAFT) at the University of Southern California (USC) invented something known as ‘contour crafting’. This process uses a concrete-like material to form a building’s walls via a programmed crane or scaffold. Eventually, components like electrical lines, plumbing, ventilation systems and wiring could be printed into houses in a single iteration.

In other words, walls floors, and ceilings could be pre-fabricated with ductwork in place!

The point is, this technology can and will impact the HVAC trades as well. Right now, it is changing how manufacturers build HVAC products. For example, recently the University of Maryland, with its partners 3D Systems and the US Department of Energy, designed a prototype heat exchanger for air conditioning that is 20% lighter and 20% more efficient than heat exchangers currently in use.

Innovative HVAC manufacturing companies will use 3D printing technologies to give themselves a competitive advantage. They will offer customization at the same price as their competitor’s standard products. Think about being able to produce condensing unit shells in colors, shapes, and with art that conforms to a consumer’s décor and tastes.

Might this launch an entirely new manufacturing segment in the HVAC Industry?

Will we see distributors improve their services by being able to stock products faster and easier? Could they get involved and offer to customize products for their contractor customers?

Could contractors themselves begin using 3D printers? Maybe not right away – the tech is too slow and still too expensive. But every day the tech advances and the speed/cost issues could be resolved. 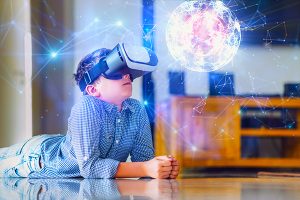 Virtual Reality has moved beyond the gaming world and now is finding its place in the HVAC Industry.

Furthermore, we mustn’t discount the attraction of virtual reality. Up to recently this has been a source for video gaming and quite a hit as the technology improves. Today, virtual reality is impacting the construction industry as well. Think about it this way – virtual reality is taking 3D computer modeling and simulation and bringing it to life. Computer modelling has been the domain of companies like AutoDesk, AutoCAD, SolidWorks and more. Their focus had been on building and HVAC system design in mostly the commercial arena. These companies have already begun incorporating virtual reality-like animation into their coding.

Back to the US News article, Thorsby cites a new commercial construction project in Des Moines, IA. During its construction – “architects, designers, and builders use virtual reality to see and edit the space before physically building it. They try out materials and finishes through virtual reality, rather than making costly decisions based on small samples.”

In our own industry, trade press, like this magazine, have published several articles regarding this technology. For example, in April 2017, the ACHR News ran a story written by Nick Kostora on the role of virtual reality in the HVAC Industry.

He quoted Amanda Comunale, director of construction piping services, Victaulic Co., as follows: “Virtual reality is increasing its role in the HVAC industry. In pre-construction, it’s allowing project teams to visualize the job site in new ways. This technology gives project teams the ability to visualize clash detection in ways not currently possible. Contractors can fully immerse themselves in the model and truly walk a job site to spot issues and clashes. This technology also gives project managers and field foremen the ability to interact with the model the same way the drawing group is able to in the office.”

The article goes on to show that this is just VR’s introduction to the HVAC world and that so much more is to come. Its role goes beyond just construction – it can be a key tool to training and education as well. Kostora says a company called Brown Technical Media Corp. is already heavy into developing this. In partnership with The Center of Air Conditioning and Heating, Brown Technical is introducing what a new training environment. They call virtual reality environment (VRE)-based training. It focuses on the technical trades. “The leadership at Brown believe this type of training may prove to have as big an impact in these fields that it now has in the medical, health care, science, and engineering professions.”

So now comes the dreamy part: how both VR and 3D printing can enhance the Performance-Based Contracting™ world.

This may sound like pie-in-the-sky stuff – and it may be right now. But the bottom line is that this technology really is real, it is here, and it will get better. It has the potential to shake things up in the HVAC industry. And there is absolutely nothing wrong with that. Science fiction or fact? It no longer matters.